in Announcements Company News · by Jason · 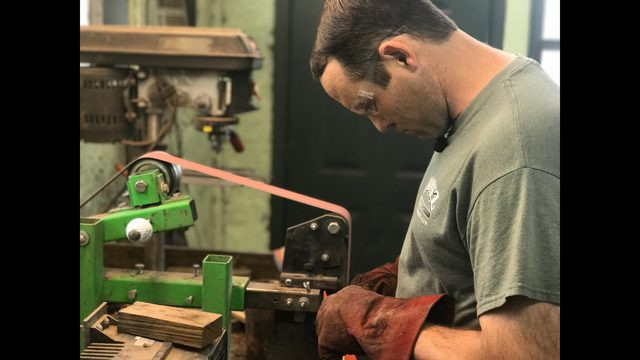 I was fortunate to be on the Abilene ABC station’s 10:00 News on 9/15/17. I spoke about the knifemaking craft and about the recent change in Texas’ knife laws. The link to the video is in the page below.

The best quote was, “The fear with a law like this was that you’ll have yahoos carrying swords everywhere and it’s all okay, but the reality is that it’s always been a crime to do bad things with a knife. This just makes it not a crime to carry one.”

There are a few mistakes in the details of the knife as they reported them. The knife in the video is forged W2 with a hamon. The handle is stabilized spalted sycamore from the Texas Capital grounds. The fittings are wrought iron from the first railroad into Dallas in 1872. The silver spacers are 1836 half dollars. The stand is from Abilene, TX mesquite, with forged wrought iron nails from an 1840’s era East Texas settler’s cabin.