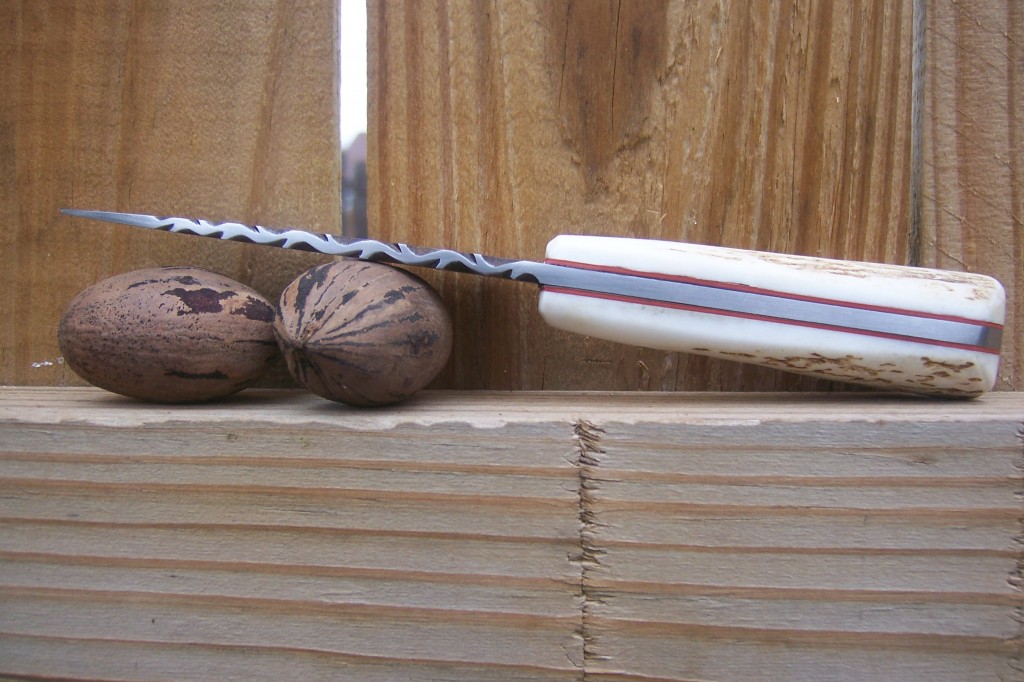 The vine and thorns filework pattern is one of the more popular filework patterns.  Almost every knife maker attempts it at one point.  After I’d done it a few times, I decided to make a tutorial.  There are a few filework videos out there, but they’re expensive.  Maybe this work-in-progress will help you out. 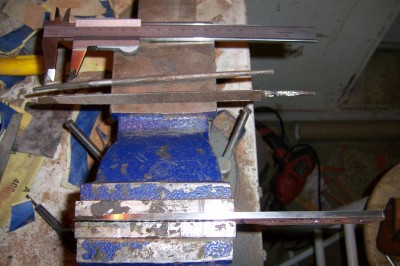 The tools you will need are in the picture above.  Unless you’re well practiced or have a good eye for proportion, you’ll need a caliper to measure and mark your initial cuts.  You’ll need a vise to hold your work, and a triangular and a round file.  I like to do my filework before heat treating, as it’s easier to do, and easier on files. 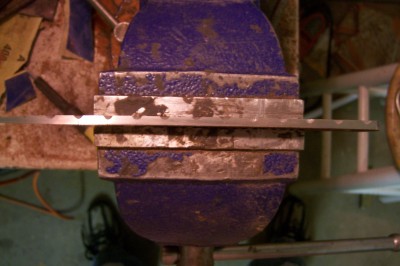 The first step is to score lines along the spine, equal distance apart.  The actual measurement is arbitrary, but about 1/2 inch is right.  The scored lines didn’t show up in the pictures.  Step two is to make a small half-circle cut with the round file at every line along one side.  Make the cut at a 45 degree angle to the flat of the blade, and perpendicular to the spine of the blade.  You want the cut to come almost to the middle of the spine, as in the picture above. 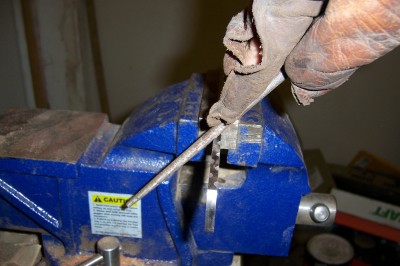 The picture above illustrates the correct angle to make your initial cuts.  From the top, it looks like a 90 degree angle, from the side, a 45 degree angle. 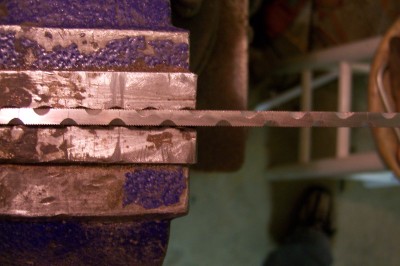 After you have made your half-circle cuts all the way down one side, turn the blade and make cuts down the other side, directly in the gaps of the first cut.  What you end up with after all the half-circle cuts have been made should look like the picture above. 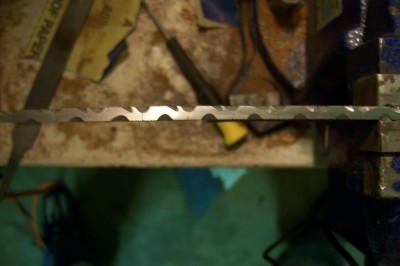 After you’ve made your alternating half circle cuts down both sides, it’s time to move on to the triangle file.  Using the same 45 and 90 angle as you made your first cuts, make a SMALL (only two or three strokse) cut with the triangle file just past each half-circle cut, toward the tip of the knife.  This step isn’t pictured, but is essential in helping you get nice, sharp, uniformly placed thorns.  After you’ve made a SMALL cut, shift your file angle to a compound 45 degree angle to make the thorns.  The file now runs at a 45 degree angle to the flat of the blade (same as the previous cuts) and also at a 45 degree angle to the spine.  Your hand should be toward the butt of the knife, with the file pointing across the spine and toward the tip of the knife.  Use this compound angle to set your thorns.  The small cuts you made in the previous step will serve to keep all of your thorn cuts in the same place relative to the half-circles.  What you’ll end up with should look like the picture above. 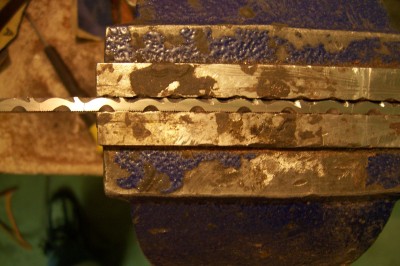 Using either the flat of your triangle file, or a small flat file, round off the “corners” of the half circles and the inside of the thorns.  It only takes a few strokes on each corner.  What you’ll end up with should look like the picture above.  In the picture, the top side has been rounded, while the bottom side has yet to be done.  You’ll notice that on the knife in question, I did all the thorns on one side before I started the other side.  This is the harder way to do it.  It’s easier if you make all of your small triangle cuts and set your thorn positions on both sides before  you clean up the thorns and round out the corners. 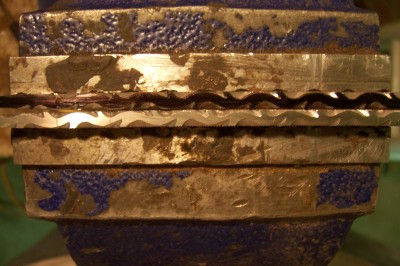 I put vine filework on two blades the day I made the tutorial.  The picture above is both blades completely finished.  On one, I marked the spine with a black sharpie to show the filework a little better.

I hope what I’ve shown is understandable, helpful, and will help you make a more beautiful knife.

Jason Fry is a behavior analyst, knifemaker, author, and father of four boys. He was a finalist on Forged in Fire season 5 episode 26. He is a member of the Knifemakers’ Guild, the American Bladesmith Society, and President of the Texas Knifemakers’ Guild.